Issa Rae didn’t find out how her dad, a Senegal-born doctor, felt about her HBO series Insecure until a couple months after the first season wrapped. In fact, she thought he might hate it. “Then in our family group chat, he dropped a really inappropriate reference about Lawrence’s back shots to Tasha,” she says with a laugh, referring to the shocking, explicit finale scene where her character’s ex-boyfriend rebounds with his bank teller. “I was like ‘Wow, he made it to the finale! That’s cool! This is not the place to show me, but…great!'”

Those uncomfortable moments are where Rae thrives. As a writer and performer, beginning with her successful YouTube series Awkward Black Girl and further explored in her 2015 memoir The Misadventures of Awkward Black Girl, she has found comedy in the minutiae that can make modern black women’s dating and professional world jarring, painful and sometimes incredibly comedic. Now with Insecure, the 32-year-old Rae has reached the biggest audience of her career – and is at the forefront of a new era of prestige TV that’s no longer led by white voices and stars.

Born Jo-Issa Rae Diop in Los Angeles, she spent her formative years doing a “zig-zag” across the world. Her family spent time in Potomac, Maryland and Dakar, Senegal before eventually returning to L.A.

“Even when I was in a stable spot like in Maryland, we were there for five years, but I was switching schools every two years,” she recalls. Even so, Rae treated every new experience like a fresh start. “It leads you to adjust as necessary. Sometimes, I didn’t adjust as necessary, and I stood out a bit too much.”

Her own blackness – and others’ interpretations of it – were at the forefront of Rae’s difficulty adjusting. During the Nineties, she found herself falling behind popular taste, leading to claims from both her white and black peers that she wasn’t “black enough.”

“When Tupac died, I didn’t know who he was and didn’t know how to pronounce his name. My hair was natural. I didn’t have name-brand clothes and had no sense of fashion. I was just a misfit.”

Going to a predominantly black and Latino high school – a shift from the mostly white private schools she’d attended earlier – helped her begin to find security in her racial identity, a journey that continued during her time at Stanford.

“I wasn’t around non-black people for a while. I didn’t have any white friends until the writers’ room.”

Rae is proud of Insecure‘s diverse writers’ room, an environment akin to group therapy, where everyone shares “the crevices of shameful human behaviour” that shape the show’s stories. Their brutal honesty with one another has yielded some of the series’ most painfully relatable moments: For example, this season, Rae’s character, protagonist Issa Dee, invites her ex Lawrence over to retrieve his mail on a night when she’s thrown a party, all to show off how great she’s doing post-split. Lawrence, meanwhile, lies and brags to his male friend about how “hot” a threesome with two girls fetishising his blackness was.

Rae recalls one particular experience shared by Natasha Rothwell – a writer who also portrays Issa’s cheeky, over-the-top friend Kelli on the series – that made Rae remember that she’s not alone in her awkward dealings with men.

“If she hadn’t heard from a dude or he hadn’t called her, she would go out in public, ‘accidentally’ call him and just leave the phone on [so] he knows she’s not bothered,” she explains, stopping as she retells the anecdote to chuckle. “I’ve done that before, too!”

Many male viewers have found an interesting kinship with the character of Lawrence, played with immense vulnerability and nuance by Jay Ellis. The fictional Issa cheated on Lawrence during the first season, leading to a messy break-up and a ploy to win him back during Season Two. While Lawrence begins as a sympathetic character and loving boyfriend, his actions towards Tasha, his rebound fling, have shown the cracks in his seeming perfection.

“The fact that dudes have latched onto this character is such a compliment, because we’re mostly women writing these male characters,” Rae says, noting that he is partially based off a real person in her life. “But the fact that men really see themselves in him and are excusing a lot of his behaviour is a testament to just how a lot of men are, currently.”

The real Issa is frequently conflated with her same-named character, and she often fields hate in her Twitter mentions from fans upset with the fictional Issa’s actions. “I didn’t think it through,” she says of the name choice. “You don’t imagine that people are gonna get so invested in the characters. I didn’t think about the audience in creating this show.”

“In creating and writing the show, this is not for dudes. It’s not for white people. It’s the show that I imagined for my family and friends.”

Still, Rae has long known who the show was not made for, and is determined to maintain her intentions. “In creating and writing the show, this is not for dudes. It’s not for white people. It’s the show that I imagined for my family and friends. That’s what I think of when I’m writing the scenes.”

Fittingly, the real emotional core of the show lies in Issa’s friendship with Molly, played with a balance of humor and intensity by Yvonne Orji. As relationships come and go and jobs strain, the best friends keep the characters and the series grounded.

“I think that’s what people are reacting to that feels so personal,” Rae reflects. “We are telling specific stories with a universal element.”

In spite of the acclaim and viewer response, Insecure was snubbed by this year’s Emmy nominations, which Rae speaks of with respectful disappointment. “The biggest gut-punch is that this would have been so great to promote the second season [with].” 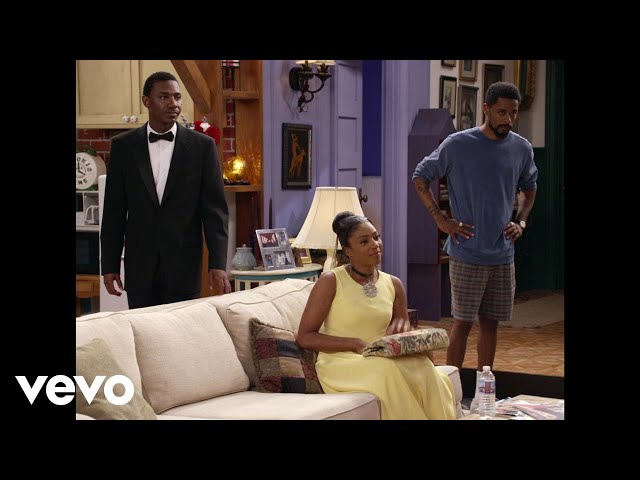 That snub, however, has only made Rae more ubiquitous. She was cast in the Alan Yang-directed video for Jay-Z’s 4:44 song “Moonlight,” a track about Hollywood double-standards in awarding diverse voices (and specifically references Moonlight‘s brief, incorrect loss to La La Land at the Academy Awards). Alongside a collection of today’s brightest stars, she plays Rachel in an all-black version of Friends. She helps lead her Ross, Jerrod Carmichael (star of the recently canceled Carmichael Show), off the set once he begins to question his role.

“We couldn’t hear the song until the day-of, so it initially did just seem like we were recreating Friends and making a satirical statement about the lack of diversity by putting black people in it,” she explains. “Hearing the song definitely informed us that there’s levels on levels.”

That Jay-Z video is just the start for Rae, primed to be an in-demand Hollywood multi-tasker for years to come. She has a few months on hiatus before she dives back into the writers’ room for the next season of Insecure, which has already been picked up for a third season. She has a two-year HBO First Look production contract – working with the network to create more diverse programming. She has also begun production on a top-secret film project. At least for now, however, Insecure remains her pride, joy and main focus.

“I want to be a pop culture staple. I want a place in the culture,” she offers of her long-term plan. “I want people to reference this show and identify with the characters for years to come.”

This article is part of our Women of the Future series, featured in issue #793 (available now).