Seinfeld‘s pilot episode aired 25 years ago, on July 5th, 1989, yet it continues to be the most influential sitcom in TV history — not only for changing how we watched television and rewriting the playbook for every comedy that followed it, but also how this “show about nothing” expanded our vocabulary.

Nearly every episode of Seinfeld contains one word or phrase that we still weave into our day-to-day interactions. These are 15 of the best instances of how the show left a lasting mark on our lexicon.

“The Sponge”: Season 7, Episode 9
The contraceptive might have been pulled from the market, but the term Elaine coined continues to define men that just aren’t worth sleeping with. After Elaine’s beloved sponge is removed from pharmacies, she hoards up Manhattan’s remaining supply while deliberating whether that episode’s love interest is deserving of one of those last few sponges. If a dude isn’t “sponge worthy”, the long-term prospects aren’t great. (Parody Twitter account @Seinfeld2000 would perhaps rebrand the word “Tinderworthy”.)

“The Puffy Shirt”: Season 5, Episode 2
It’s a situation every Seinfeld viewer has encountered: A person who talks so quietly that you can’t understand them, yet you don’t want to embarrass them or ask them to repeat themselves. In most cases, a conversation with a low-talker leaves us wondering “Wait, what?” In Jerry’s case, his chat with a low-talker ended with him wearing that embarrassing puffy shirt on The Today Show. “But I don’t want to be a pirate!” 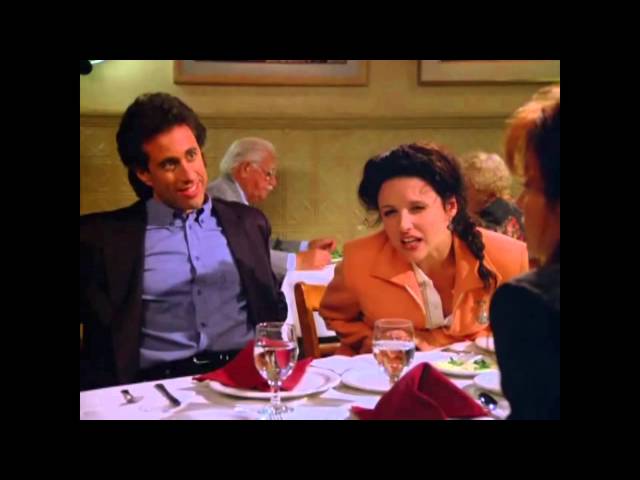 “The Raincoats”: Season 5, Episodes 18 and 19
A close-talker is the annoying cousin of a low-talker, and as portrayed by Judge Reinhold, Seinfeld‘s close talker gets uncomfortably right in the face of the person they’re conversing with. Forget about personal space; you can feel their hot breath as they’re speaking to you. Luckily for Jerry and Elaine, they dump Aaron the close-talker on Seinfeld’s parents, who don’t seem to mind someone infringing on their individual proximity.

“The Yada Yada”: Season 8, Episode 19
Before there was “tl;dr,” there was “yada yada yada”. On Seinfeld, these three words were liberally used to glaze over the boring details of a long story, but things go awry when “yada yada yada” starts burying important information. Still, this is a term everyone has used in real life situations to avoid plunging into a lengthy mundane conversation. “Yada yada” existed before Seinfeld, but the show helped make it part of our everyday storytelling.

“The Yada Yada”: Season 8, Episode 19
This gem comes from the same episode that gave us “Yada yada yada”. After Jerry accuses dentist Tim Whatley (played by Bryan Cranston) of converting to Judaism just for the jokes, Jerry goes around town telling dentist jokes and complaining about a dental procedure. This earns him the title of “anti-dentite”, a riff on the anti-Semitic jokes Whatley now has free access to. Honestly, doesn’t everyone has a little anti-dentite in them?

“The Label Maker”: Season 6, Episode 12
This episode changed the entire economy of gift giving. Jerry gives his Super Bowl tickets to Tim Whatley, who in return gives Jerry the titular label maker. Elaine happened to give Whatley the same type of label maker, leading her to believe that the dentist “regifted” the item. Jerry, meanwhile, wants to “degift” his Super Bowl tickets and ends up regifting the label maker to the roommate of George’s new girlfriend. Long story short, this episode popularised this term that describes what we do with the presents we can’t return for store credit.

“The Stall”: Season 5, Episode 12
It’s elevated bathroom humour, Seinfeld-style. Upon discovering there’s no toilet paper in her stall, Elaine asked her restroom neighbour if she can hand her some TP from her stall. Elaine is informed by the stallmate next door (Jerry’s girlfriend, she’d find out later) that she “can’t spare a square” of toilet paper. It was perhaps the most selfish moment in TV history, but this situation has undoubtedly played itself out a million times in real life. This episode also introduced us to the term “mimbo”, short for male bimbo.

“The Implant”: Season 4 Episode 19
One of the two biggest party fouls there is – the other being “not respecting wood” and putting a cup down on a wood table without a coaster – double-dipping is when you dunk the same chip twice in the dip, thus passing your germs into the communal bowl. George double-dips at a funeral of all places, and then gets into a fight with his girlfriend’s brother over the transgression. It’s something anyone who ever encountered chips and salsa is guilty of — and Seinfeld called it out for the crime it is. 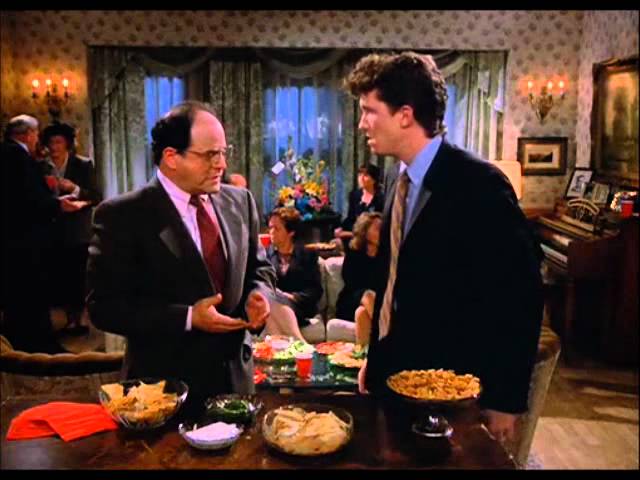 “The Soup Nazi”: Season 7, Episode 6
The most memorable line delivered by one of Seinfeld‘s most unforgettable one-off characters, the Soup Nazi. “That line has become an ongoing social commentary for anyone who’s restrictive of how you do something,” actress Brenda Strong, who played Sue Ellen Mischke, told Rolling Stone. “There’s a sushi chef in town that won’t allow you to eat unless you do it the way he wants you to eat it, so in my family, instead of ‘No soup for you,’ it’s ‘No sushi for you!'”

“The Strike”: Season 9, Episode 10
This yuletide Costanza family tradition centred on “the airing of grievances”, “feats of strength”, and of course, the Festivus feast. Decades after the episode aired, this December 23rd faux-holiday – which was based on a made-up event that the family of Seinfeld writer Dan O’ Keefe celebrated in the 1960s – has become an occasion for the secular to participate in holiday cheer and to commemorate the sitcom.

11. ‘Not That There’s Anything Wrong With That’

“The Outing”: Season 4, Episode 17
After Jerry and George are mistakenly identified as a gay couple in a college newspaper, the pair frantically try to reassert their straightness while making sure to mention “Not that there’s anything wrong with that”. “The episode, in a way, becomes a wry, self-reflexive commentary on television’s uncertain treatment of homosexuality,” author Stephan Tropiano wrote in The Prime Time Closet. This episode ended up winning a GLAAD Media Award. With television becoming more sexually open-minded in the years since Seinfeld, the phrase itself has become a casual quip of acceptance of any lifestyle.

“The Contest”: Season 4 Episode 11
This phrase was the crux of what became the most beloved and critically acclaimed Seinfeld episode ever. The plot: Four adults bet who can hold out from masturbating the longest. Spoiler alert: none of them win, but the competition did give us this most memorable of phrases. Being “master of your domain” isn’t just about abstaining from self-pleasure; the term has become a metaphor from restraining yourself against any desire, whether it’s in a contest setting or not. The phrase had a clever callback in “The Puffy Shirt”, when we learn of a hand model that became infatuated with himself and was not “master of his domain”.

“The Hamptons”: Season 5, Episode 21
“I was in the pool!” George yelled after being caught in his second-most emasculating moment. (First place goes to George being caught by his mother, alone, with an issue of Glamour, like in “The Contest”.) This episode thankfully informed women about the cruel science of swimming pools. George’s loss – in this case, a girlfriend who quickly fled the Hamptons – was mankind’s gain.

“The Race”: Season 6, Episode 10
For one episode, Jerry Seinfeld became the Bartleby of the Nineties. Much like Herman Melville’s scrivener, Jerry, without providing rhyme or reason, just didn’t want to do something — in this case, run. Also a riff on Calvin Coolidge’s proclamation regarding the 1928 presidential election, Jerry spent years declaring “I choose not to run” to avoid a footrace rematch against his high school adversary Duncan Meyer. Two decades after the episode aired, sitcom fans still use the phrase as their “I’d prefer not to”. 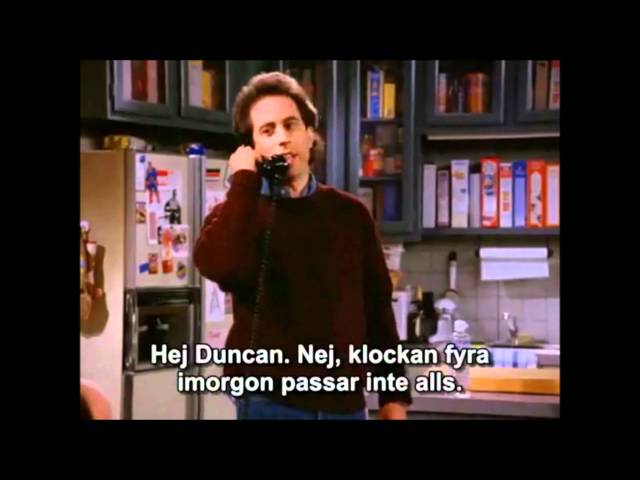 “The Serenity Now”: Season 9, Episode 3
Frank Costanza’s two-word anger management technique became an everyday mantra for all Seinfeld fans overwhelmed by life. Frank often screamed the calming phrase to lower his blood pressure in high-stress situations, like when George and Lloyd Braun bankrupt his garage computer company. The rest of us sometimes call upon “Serenity now!” when an “ohm” or an f-bomb just won’t cut it. 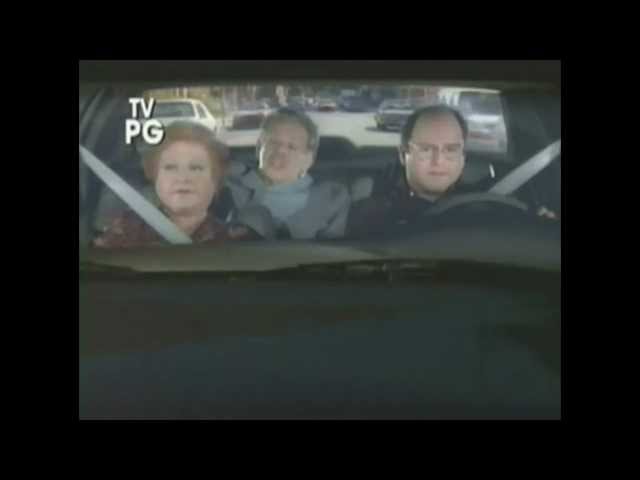