As predicted, Anthony Scaramucci’s brief and profane tenure as White House Communications Director came to an abrupt end on Monday afternoon when newly-installed White House Chief of Staff John Kelly requested his resignation. Scaramucci’s 11-day stint is the second shortest in White House history, just barely edged out by Jack Koehler‘s. (Koehler lasted one week in the Reagan administration after knowledge of his involvement in a preteen version of the Hitler Youth became public.)

Scaramucci’s term was short, but memorable. To commemorate his departure, we’ve ranked, from least absurd to most, 10 of the Mooch’s 11 working days at the White House.

10. Monday, July 31st: After just 11 days on the job — and 15 days before his official start date — Scaramucci is out as White House Communications Director. Sarah Huckabee Sanders confirms there are no plans for him to remain at the White House in another role “at this time.”

9. Friday, July 21st: Scaramucci, whose name was previously floated for other administration jobs (director of the White House Office of Public Liaison and Intergovernmental Affairs, ambassador to the Organization for Economic Co-operation and Development and senior vice president and chief strategy officer for the U.S. Export-Import Bank) is officially named White House Communications Director. Long-suffering press secretary Sean Spicer resigned in protest, but Reince Priebus denies any tension, telling reporters he and Scaramucci are “very good friends.” Scaramucci takes it a step further, saying he and Priebus “are a little bit like brothers.” In his first appearance behind the lectern, Scaramucci says four times, “I love the president.”

8. Sunday, July 23rd: On CNN, Scaramucci refers to an anonymous source who told him that “if the Russians actually hacked this situation and spilled out those e-mails, you would have never seen it;” moments later, he admits the source was Trump himself. In the same interview, Scaramucci offers some professional feedback to his new colleague, acting Press Secretary Sarah Huckabee Sanders. “Sarah, if you’re watching, I loved the hair and makeup person that we had on Friday … I would like to continue to use the hair and makeup person.”

7. Saturday, July 22nd: Scaramucci announces on Twitter that for the sake of “full transparency,” he is deleting some old tweets in which he advocated for gun control, called Hillary Clinton “incredibly competent” and expressed hope that she would run for president and called Trump “so smart with no judgement.” “Past views evolved & shouldn’t be a distraction. I serve @POTUS agenda & that’s all that matters,” Scaramucci said.

6. Tuesday, July 25th: Scaramucci says he’s going to fire assistant press secretary Michael C. Short for leaking information to the press, before informing Short himself. He later threatens to “fire everybody” until he finds the leaker and laments the fact that Short had to find out about his firing via press reports. “The fact that you guys know about it before he does really upsets me as a human being and as a Roman Catholic,” he says. “I should have the opportunity, if I need to let somebody go, to let the person go in a very humane, dignified way.”

5. Thursday, July 27th: Scaramucci makes an impromptu appearance on CNN’s New Day, calling in to reiterate accusations that Priebus was leaking information to the press. “The fish stinks from the head down,” Scaramucci told CNN. But he added that he and Priebus were still like brothers: “Some brothers are like Cain and Abel.” 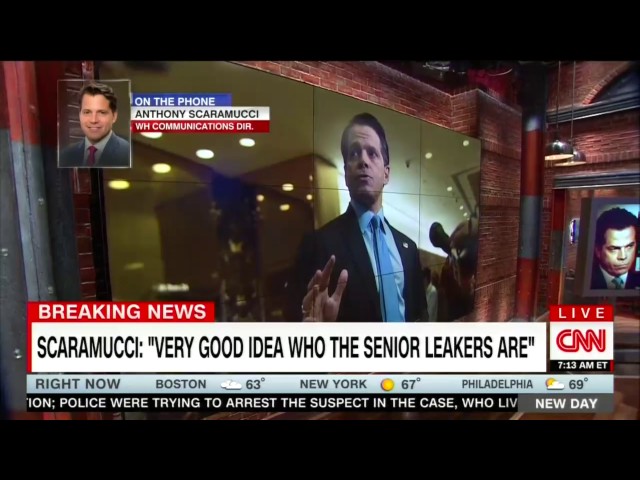 4. Sunday, July 30th: Scaramucci’s former spokesman taunts Priebus on Twitter and floats, then backs away from, a suggestion that Priebus is having an extra-marital affair.

3. Monday, July 24th: Scaramucci accompanies President Trump to the Boy Scout Jamboree in West Virginia, where the president brags about the size of the crowd, bashes Clinton and Barack Obama, thanks the assembled scouts, ages 12 to 18, for voting for him and warns them against leaving the business world in favor of sex-fueled yacht parties in South of France. The Boy Scouts apologize to families for the “the political rhetoric that was inserted into the jamboree.” The same day, Scaramucci’s wife, who filed for divorce two weeks earlier, gives birth to their second child. Scaramucci reportedly texts her, “Congratulations, I’ll pray for our child.”

2. Friday, July 28th: Trump addresses police in Suffolk County, New York, where he evokes the “blood-stained killing fields” of Long Island and encourages police to be rougher with suspects as they’re taken into custody. Suffolk County Police quickly distance themselves from the remarks. After his speech, Trump, reportedly unimpressed by Priebus’ reluctance to fire back at Scaramucci publicly, announces via Twitter that Secretary of Homeland Security John Kelly will replace him. Scaramucci reportedly meets his child for the first time, the same day news of his divorce leaks to the press. He cancels a scheduled appearance at Politicon.

1. Wednesday, July 26th: Politico reports Scaramucci will continue to profit from SkyBridge Capital, the investment firm he recently sold, while in the White House. An incensed Scaramucci phones New Yorker reporter Ryan Lizza in a failed attempt to extract the source of an anonymous report that Trump dined that night with former Fox News executive Bill Shine. During the call, Scaramucci, speaking in the third person, declares “the swamp will not defeat him” and expresses desire to “kill all the fucking leakers.” He adds, “I’m not Steve Bannon; I’m not trying to suck my own cock” and closes the conversation telling Lizza, “I’ve gotta start tweeting some shit to make this guy crazy.” That night, he tweets: “In light of the leak of my financial info which is a felony. I will be contacting @FBI and the @TheJusticeDept #swamp @Reince45.”