This year, we’ve asked 10 writers to pick some of their favourite TV episodes from 2017 and weigh in on why they were great stand-alone eps and the highlights of our viewing year. First up: Sean T. Collins on Girls’ “American Bitch.”

When 2017 lies dead and buried in the ground, “Separate the art from the artist” will be chiseled on its tombstone. But what will we find in the grave?

If it’s the idea that creators are shielded from scrutiny by the strength of their creations, then goodbye and good riddance. For too long, sexual predators in entertainment and media triple-axled their way across the thin ice of “open secrets,” their safety ensured by power. (Why, one of these men even became president!) The crack, the splash and the final desperate glug-glug-glugs were long overdue.

If we’re lucky, though, this year of revelation and reckoning will force a deeper reexamination of our desire to see artists and their art as identical, because that dull blade of interpretation cuts both ways. Like a bizarro Louis C.K., whose professional accolades protected his personal reputation, Lena Dunham is a multi-hyphenate auteur whose detractors see her history of poor attempts to address urgent issues offscreen and take it that her art is similarly inept. The best way to argue against this clumsy conflation is by example – and “American Bitch” is as good an example as it gets. The third episode of Girls‘ sixth and final season, what’s arguably the series’ finest (half-)hour attacks the creator/creation dichotomy with funny, frightening ferocity. This parable about abusive artists doubles as case for its own artist’s singular skill as an observer of moral failure … including her own.

Like many of Girls‘ most acclaimed instalments, “American Bitch” is a bottle episode, isolating Dunham’s character, Brooklyn-by-way-of-East-Lansing writer/fuck-up Hannah Horvath, with Chuck Palmer, a beloved novelist played by guest star Matthew Rhys. The literary superstar has invited Hannah to his apartment to personally discuss an article she wrote on “a niche feminist website” about accusations of sexual impropriety swirling around his recent college tour. Palmer has a habit of taking young fans back to his hotel, where he propositions them for oral sex under circumstances that are dubious at best and outright non-consensual at worst.

With angrily self-deprecating honesty that wins Hannah over, Palmer paints himself as an admittedly caddish but by no means predatory figure whose only crime is failing to fully consider the emotional needs of his one-night stands. Complimenting her writing (and, more stealthily, her looks), the award-wining novelist implores her to consider his side of the story; having read so many of those stories in the past – she’s a disillusioned Palmer superfan – our heroine obliges. Only then does he spring his trap – and whip out his dick. 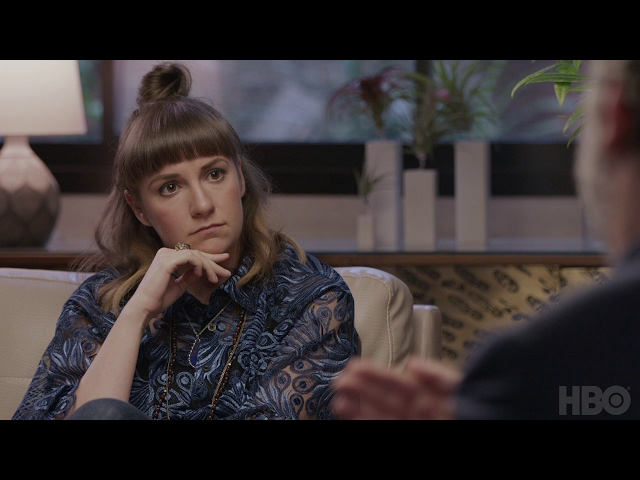 On Hannah’s side of the ledger, Dunham’s character describes lingering memories of too-touchy elementary-school teachers and women’s desperate desire to be seen in a world of powerful men with chilling clarity. She also embraces the contradiction of loving the writing of Philip Roth despite its sexism; “God, I hope someone writes a book about what a cunt I am someday,” she half-jokes.

Dunham couldn’t have selected a better sparring partner for all of this, since Matthew Rhys is no stranger to weaponised sexuality himself. As deep-cover Soviet spy Philip Jennings on The Americans, the honeypot is his weapon of choice, as he and his wife Elizabeth (played by the actor’s real-life spouse Keri Russell) seduce their way through a small army of human intelligence assets on behalf of the Motherland. But the moment he removes his latest disguise post-coitus, his discomfort with the work – and his self-loathing for participating in it – is never far from his face. That inner conflict is what makes his performance so compelling, and it’s arguably the heart of the whole show. So to see him cut loose as a full-fledged villain – playing many of the same confidence games as his Russian operative, only to absolutely revel in the thrill of duping her once his deception is out in the open – is a dark cathartic thrill. The smile on his face as Dunham’s character realizes she’s been had is so powerfully, gleefully malicious it practically knocks his precious signed first-edition books off the shelves.

But a two-hander like “American Bitch” requires, well, both hands to succeed, and as a showcase for its star’s talents it’s tough to top. Lena Dunham’s acting on Girls rarely gets the praise it clearly deserves. Do yourself a favor and watch “American Bitch” over again, focusing solely on how she sounds, moves and interacts. You’ll marvel at how much range the show’s creator brings to a character many people don’t even register as a character, but merely an extension of herself. Dunham’s eyes brighten and her voice sharpens when she’s leveling an accusation or defending a principle, then grow sad and flat when she’s recounting a past trauma or wrestling with an issue she worries is hopeless. She moves like a different person when Palmer’s in the room with her than when she’s alone. (This bit is driven home hilariously when Hannah takes advantage of an interrupting phone call to retreat to the bathroom, patting down her armpits and groin for excess funk.)

When Chuck pays her looks an encrypted compliment by assuring her he won’t treat her like “just another pretty face,” you can see her choking down on her internal he thinks I’m pretty! as surely as if it were something she’d just physically swallowed. And the total transformation of her body language when he asks her to lie on the bed with him is actually frightening to behold. She goes from at ease and confident to visible, visceral awareness of her own body and its presence in a stranger’s bedroom in a split second, cradling Palmer’s Philip Roth hardcover in her arms like a child clinging to a teddy bear to ward off the terrors of the night.

Indeed, comparing this episode to a nightmare isn’t too far from the mark. It ends with a swerve away from Girls‘ customary realism: As Hannah finally escapes the monster’s lair, she disappears down a street filled entirely with faceless, professionally dressed young women, all of them moving toward the maw of Chuck Palmer’s apartment building. The scene and its fade to black are accompanied by “Desperado,” Rihanna’s grim elevation of an unfulfilling but desperately needed relationship with an emotionally unavailable man into a tale of survival in the wild. Hannah can walk away from Palmer if she chooses, but the cycle continues. May “American Bitch,” Dunham’s masterwork, be an artefact from the time just before women like Hannah changed the story’s ending.