This year, we’ve asked 10 writers to pick some of their favourite TV episodes from 2017 and weigh in on why they were great stand-alone eps and the highlights of our viewing year. Today: Sam Adams on Bojack Horseman‘s “Time’s Arrow.”

Four seasons in, Bojack Horseman fans are used to being knocked for an emotional loop. Raphael Bob-Waksberg’s animated Netflix series started out unprepossessingly enough as the story of a misanthropic former sitcom star wallowing in residuals payments and self-pity in the Hollywood hills. But it soon became clear that the title character, voiced by Will Arnett, wasn’t just another of TV’s brooding antiheroes. He was a man – okay, technically a cartoon horse – in the grip of lifelong depression. The kind who’s been scarred by emotionally abusive parents and more comfortable seeking validation from crowds of anonymous strangers than the flesh-and-blood people who, sometimes against their better judgement, love him.

But as the show has grown deeper and sadder – and also funnier and more rewarding – it’s also taken bigger risks, exploiting its episodic format to break away from familiar structures and push the boundaries of its medium. In the fourth season’s second episode, “The Old Sugarman Place,” a despondent Bojack, still reeling from the drug-induced death of his former castmate, holes up in his mother’s dilapidated childhood home and finds himself transported into her past, lending shades of understanding to a woman we’ve thus far experienced as a sharp-tongued monster. But it’s only a prelude to the season’s penultimate episode: “Time’s Arrow,” which takes us inside Beatrice Horseman’s mind itself.

That mind has been deteriorating through the season, as Beatrice experiences the progressive effects of Alzheimer’s dementia; by the time Bojack is driving her to a care facility (he’d just as soon leave her by the side of the road), she’s almost slipped out of the present tense altogether. One moment, she’s rambling about how “time’s arrow neither stands still nor reverses” while her groaning son tries to keep his eyes on the road instead of rolled back in his head. The next, she’s being driven by Henrietta (Majandra Delfino), her former maid. But unlike Bojack’s visions of the past, which unrolled like neatly staged playlets, Beatrice’s mindscape is disjunctive and damaged – partially by her memory’s progressive failure, partially some through an act of will. (Occasional sight gags, like a shot of Beatrice reading a book titled “Several Months Later,” keep us from getting altogether lost.)

In Beatrice’s memories, which take us from her childhood as the daughter of a wealthy father (Matthew Broderick) and lobotomised mother through her rebellious marriage to a would-be Beat novelist (Arnett again) and their eventual divorce, her mental supernumeraries appear as faceless figures in the background, their identities washed away by time. But Henrietta’s face is deliberately, even violently, obscured, obliterated by a pulsating tangle of black lines as if it’s been angrily scratched out of a photograph.

Director Aaron Long and writer Kate Purdy whisk us through Beatrice’s head so briskly, using the animated equivalent of in-camera transitions to switch time frames without so much as a cut – soon, our grasp on reality starts to slip away as well. You can almost feel Beatrice, whose Dantean given name no longer feels like an accident, fighting through the turbulent waters alongside you, or occasionally trying to pull you away before you’ve seen too much. Even more disconcerting, her maid sometimes seems to be rewriting the memories while we’re inside them. When Bojack’s father, now a bitter failed novelist who’s been forced to go to (well-paid) work for his father-in-law’s company, rages about being left “hat in hand,” the picture glitches and wobbles until an actual bowler obediently appears in his hands.

What’s truly horrifying about “Time’s Arrow,” however, isn’t the memories that have disappeared. The ones that remain have become a catalogue of personal horrors, played on endless loop in a brain that has lost its ability to take in anything new. In Beatrice’s mind, her father is constantly scolding her about her weight; he’s always belittling her for coming back from college with a degree instead of a husband; she’s always waiting at the bottom of a jungle gym twisted like an Escher painting, jeered at by the popular girls who seem to loom a hundred feet above her; and her childhood doll, her “baby,” is always burning in the fire, its plastic eyes melting as her father explains it’s for the best. She does horrible things as well, especially involving Henrietta, whose name, which seemed only to be a running joke for the season’s previous 10 episodes, now takes on a tragic significance. But you sense even those come from a desire to help others avoid the life she had, not realising that kind of interference is what made her so miserable in the first place. 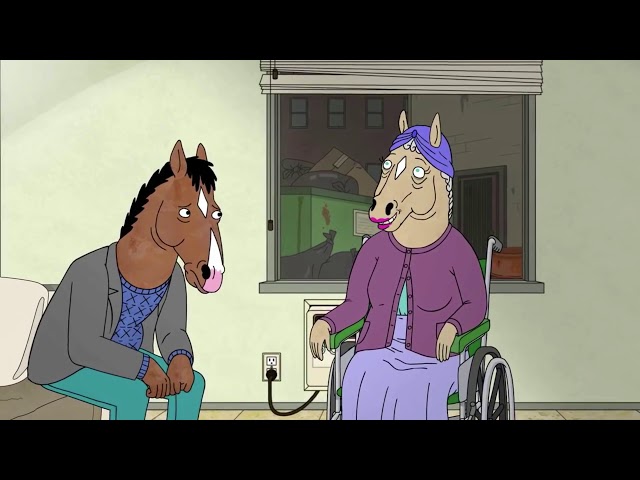 It only adds to the tragedy that no one will ever know the things in Beatrice’s subconscious, which might have made her more sympathetic to her beyond-embittered son, who asks if he can pay for five years in a nursing home up front so he never has to see her again. And he too is as his parents made him, a poisoned narcissist with occasional moments of clarity to which he clings, and which inevitably slip from his grasp.

“Time’s Arrow” is the most vivid and viscerally frightening depiction of what it feels like to lose your grip on the world since Don Hertzfeldt’s Everything Will Be OK, and it shares with its contemporary Twin Peaks the sense that the world’s placid surface is just waiting to be cracked – we could at any minute plunge into the depths below. (That’s not even a metaphor: In another episode from Bojack‘s fourth season, the people-pleasing star Mr. Peanutbutter’s mansion drops several hundred feet into the earth owing to a fracking mishap.) As heartbreaking as it can be, Bojack Horseman isn’t a sentimental show. There’s no hope of redemption for Beatrice at the end of the episode, just a fleeting moment of half-remembered happiness – and even that may be a lie. Time’s arrow doesn’t stand or reverse. It doesn’t even march. It simply stabs you through the heart.